EVERYTHING YOU NEED TO FISH

POV Lake Resort is located in a protected bay of North Twin Lake. A clear 2,899 acre scenic body of water is connected to 650 acre South Twin Lake. The combined waters are listed as a class "A" musky lakes and are known for huge fish. These lakes also offer tremendous opportunities throughout the year for catching walleye, northern pike, crappie, blue gills, largemouth bass and smallmouth bass. North Twin has ten miles of shoreline, up to 60' holes and abundant structure such as reed beds, underwater islands, rock bars, and cabbage beds to harbor your trophy fish. Both lakes are located within the Nicolet National Forest. These northern Wisconsin lakes produce trophy fish year after year!

Whether you bring your own boat, or rent one of ours you will more than likely find yourself taking advantage of the North Twin Lake by boat. A screened-in fish cleaning house is available weather permitting and is equipped with lights, electricity and running water. The resort offers a complete docking facility for your boat with your own slip for cabin rentals. Launching your boat here at the resort is easy and can accommodate crafts up to 20' in length. Premium unleaded gasoline is available on the premises. The resort also sells bait and fishing supplies.

Do you have a launch available to the public for boats? 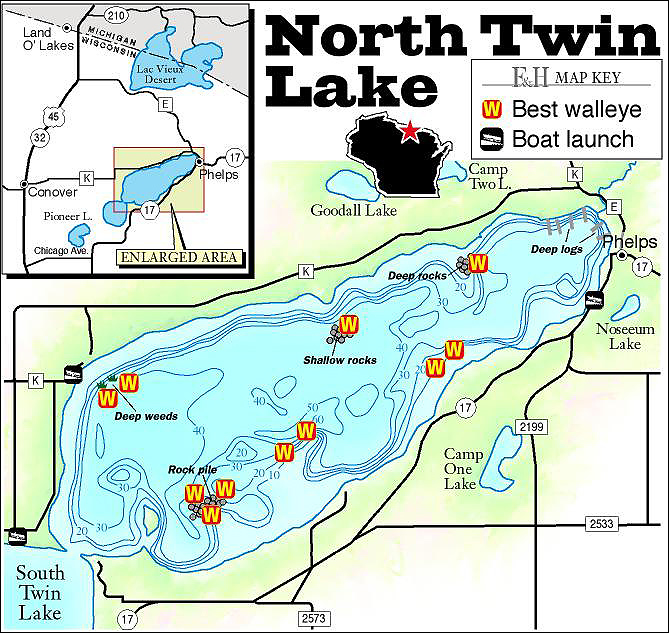 LOCATED ON A MUSKY FACTORY

Coadys' POV Lake Resort is located on North Twin Lake, one of the best muskellunge fishing lakes in the country. Annually scores of musky are caught off the shores of the resort, where we keep records for all to see.

The black crappie is considered an excellent game fish when taken on light tackle. Extreme care must be taken in landing these fish because their mouths are very tender. Anglers specializing in catching black crappie know that to be successful the bait must be kept constantly moving. The best baits are small minnows, small maribou-covered jigs, plastic minnows, or small streamer flies cast along the outer edges of weed beds. The crappie lies in weed beds in deep water during the day and bite best in early morning or toward evening. In summer, with the abundance of small fish for feed, they are more difficult to catch. Small minnows are used as bait in winter.

Plain garden worms are the favorite bait for bluegills, but they can be caught on a number of different types of lures. The fly fisher can have fun with poppers, especially in spring and early summer, when nests are concentrated in shallow water. Most large bluegills are taken in deep water during the summer months by drifting with the wind using worms. Wintertime jigging in the weed beds with grubs or mousies on ice jigs also produce excellent results. It usually hides around, and inside, old tree stumps and other underwater structures. It can live in either deep or very shallow water, and will often move back and forth, depending on the time of day or season.

Largemouth bass will bite on almost anything. They can be caught on minnows, worms, or other live bait, plus poppers or streamers presented with a fly rod, or plugs thrown from a casting or spinning rod. Because the bass is usually associated with weeds, a weedless bait will often be necessary. Best fishing times are early morning and evening during the warm months. Bass like warm water and warm weather. Few bite in the winter.

The natural home for the musky is in the northern lakes and rivers. It is a solitary fish and lurks in weed beds or other protective cover. Anglers usually have the best luck fishing during the daytime. Large plugs, spoons, and bucktails are the best artificial baits. A live fish bait 10-12 inches long is also good.

Unlike other common species of game fish, northern pike are most active when the water is cool. The northern pike is quite accommodating to anglers, biting best during the daylight hours. Being a predator, northerns prefer live fish baits, and wobbling spoons. They are a favorite target of ice fisherman with tip-ups.

Pound for pound the smallmouth bass is the scrappiest fish of all Wisconsin. It is usually associated with a rocky stream or lake environment where its favorite food, the crayfish, is abundant. Some of the best lake fishing takes place in June during, and just after, the spawning season, and in early fall. Natural baits like hellgrammites, dragonfly larvae and crayfish are especially effective during early morning or late evening. (Note: in Wisconsin it is illegal to possess live crayfish while fishing or while possessing angling equipment on any inland water.) Probably the best artificial baits are those used on the surface. Light tackle is ideal. Fish quietly, casting toward rocks or logs, keeping the rod tip up and the line taut.

The walleye is one of the most highly prized game fishes in Wisconsin. Thousands are caught each year during their spring spawning runs. Most all Walleye fishing in May in lakes or rivers is done with a live minnow. There are different species of minnows and most will work for the angler. Walleyes are primarily minnow feeders, but leeches, small bullheads, nightcrawlers, and various small plugs are favorite baits - especially during warmer water months. In clear waters, walleyes usually stay in deeper areas during the day, moving into the shallows at night. In more turbid waters, they can be caught throughout the day. The large, unusual eyes of the walleye are designed to help them easily find their prey.

Yellow perch are primarily bottom feeders with a slow deliberate bite. They eat almost anything, but prefer minnows, insect larvae, plankton, and worms. Tackle may range from a simple handline or a fly rod in summer to a short, whippy, jigging rod in winter. Because perch prefer cooler water, the best fishing is usually in deep water. Perch move about in schools, often numbering in the hundreds. If one spot is unproductive after a few tries, it is best to move to other spots until a school is located.

Loading...
Upps!
You're running a web browser we don't fully support. Please upgrade it for a better experience.
Our site works best with Google Chrome.
How to upgrade the browser